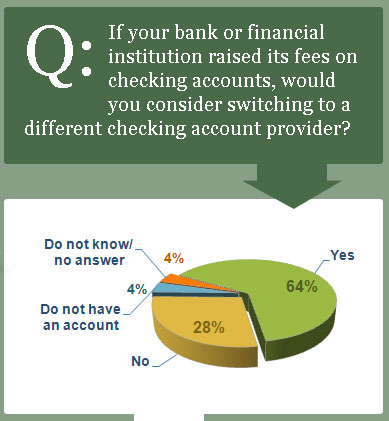 “With restrictions on overdraft fees and a proposed cap on debit card swipe fees, financial institutions need to recover that revenue elsewhere,” says Greg McBride, CFA, senior financial analyst at Bankrate. “As a result, they’re re-evaluating everything from debit card reward programs to free checking accounts, and anything that was once free is now fair game.”

Our poll, however, suggests banks may want to think twice before squeezing consumers for higher checking fees. For one thing, they risk losing lucrative high-income customers. Of those making between $50,000 and $75,000 annually, 73 percent would consider moving their account. For those earning more than $75,000, the figure rises to 75 percent.
Read more: Bankrate

This site uses Akismet to reduce spam. Learn how your comment data is processed.